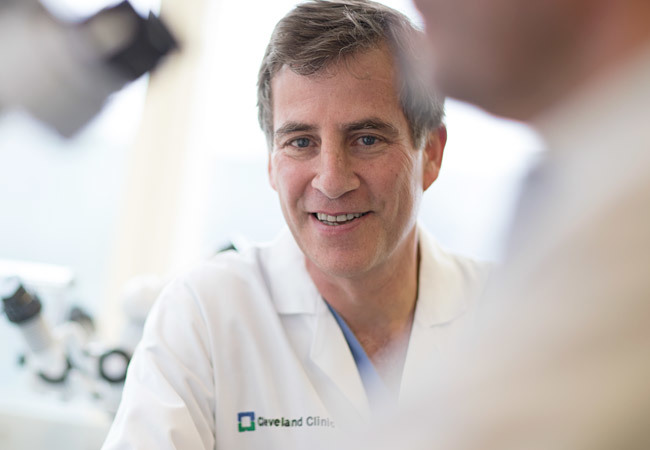 Dr. Sears received the award for his 2016 paper, Comparative Systems Pharmacology of HIF Stabilization in the Prevention of Retinopathy of Prematurity. Cole Eye Institute researcher George Hoppe, MD, PhD, is Dr. Sears’ co-author on this and many other related papers.
ROP: A threat to children worldwide

“ROP is the most common cause of childhood blindness worldwide, and its incidence grows as severely premature infants are resuscitated at increasingly lower birth weights and younger gestational ages,” Dr. Sears says. “Each year about 500,000 children in the U.S. and 13 million worldwide are born prematurely. In babies born at less than 28 weeks’ gestation, the incidence of ROP can be as high as 75 percent.

“Supplemental life-saving oxygen prevents mortality in these premature infants, but is unfortunately simultaneously toxic to premature developing tissues like the retina,” he continues. “Oxygen is also toxic to developing lung tissue that ordinarily is submersed in amniotic fluid.”

Dr. Sears’ research team uses a mouse model of ROP to test the hypothesis that small-molecule activators of hypoxia-inducible factor (HIF) are able to drive retinal development early in life to prevent ROP detachment. They have found a way to prevent this damage to premature organs by pharmaceutically targeting the oxygen sensor in developing tissues to allow oxygen supplementation while protecting these fragile organs.
Envisioning an effective therapy to promote vascularization

“By changing the way cells respond to oxygen, the drug creates protection through gene regulation and a change in the metabolic programming of susceptible organs,” Dr. Sears explains. “Most importantly, because this therapy can be administered systemically, it offers the promise of protecting all tissues from oxygen damage.”

They are now investigating use of low-dose, systemic, intermittent drug delivery to alleviate hyperoxia-induced retinal damage of ROP.

“We envision intravenous, soluble small molecules, administered one to two times a week in the first few weeks of life until corrected gestational age of 30 weeks, to gently induce the normal coordinated growth of retinal blood vessels and possibly other organ systems negatively impacted by hyperoxia. In this way, directing normal vascular growth prevents ischemia, which is the substrate for disease.

“Visual science has always been important because sight is so valuable,” Dr. Sears notes. “However, the eyes also reflect systemic disease, especially in severely premature infants. We hope that protection against blindness in babies may protect organ systems as well.”
Dr. Sears’ passion for more than 15 years

“Retinopathy of prematurity has been Jon’s passion for more than 15 years,” says Daniel Martin, MD, Chair of Cole Eye Institute. “Jon had his first breakthrough paper in PNAS in 2008 and since then there has been an orderly, steady scientific march of discovery leading to this 2016 PNAS paper. He has discovered the mechanism, exhaustively filled in the details, and identified a lead candidate drug. His is one of those great scientific stories.”

Dr. Sears, on staff at Cleveland Clinic since 1998, is also a member of the Department of Cellular and Molecular Medicine in the Lerner Research Institute. He earned his undergraduate and medical degrees from Yale University. After his ophthalmology residency at Yale- New Haven Hospital, he completed a vitreoretinal fellowship at Emory University Hospital.

Read more about Dr. Sears’ work: Combating Retinopathy of Prematurity, the Most Common Cause of Childhood Blindness