The most common first sign of the breast cancer is a lump in the breast- Sometimes small, hard lumps in the armpit may be a sign that breast cancer has spread to the lymph nodes. Although these lumps are often painless, they may be tender. Sometimes the lump is found on a screening mammogram before it can be felt. The lump is present all the time and does not get smaller or go away with the menstrual cycle. The lump may be tender, but it is usually not painful. Pain is more often a symptom of a benign cancer, but should be checked by a doctor.

The second sign:
A change in the shape or size of the breast is the second sign. There is often dimpling or indentation of the skin with the formation of wrinkles. The nipple might be pulled in. The dimple readily appears especially when the breast is moved. As the cancer progresses, an ulcer is formed with partial edema of the breast skin, prominent hair holes and an orange-peel appearance.

The third sign:
Itching of the breast or nipple may be a sign of inflammatory breast cancer. Itchiness is often not relieved by ointments, creams or other medications.

The fourth sign:
Unusual discharge from the nipple that may be clear, bloody, or another color. It’s usually caused by benign conditions but could be due to cancer in some cases.

Signs of Breast Cancer
Most Signs Of Breast Cancer are visually observable and highlight the need for regular breast self exams. While breast cancer cannot be prevented, early detection of cancer warning signs and early diagnosis dramatically increases the likelihood of successful treatment. 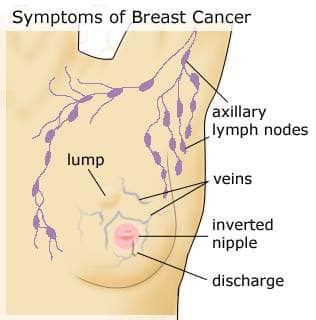