Although experts have debated the potential link between social media use and decreased well-being for years, a new study adds more fuel to the fire.

A new study investigates the psychological impact of social media.

According to the first author of the new study, which featured in the Journal of Social & Clinical Psychology , no scientific study has proven a causal connection between the two until now.

University of Pennsylvania psychologist Melissa G. Hunt believes that her team is responsible for the first experimental study of Facebook, Snapchat, and Instagram use.

She argues that previous studies were either limited in scope or used “unrealistic situations,” such as monitoring participants for only brief periods in laboratory settings.

“We set out to do a much more comprehensive, rigorous study that was also more ecologically valid,” says Hunt.

Hunt’s team focused on Facebook, Snapchat, and Instagram because they are the social media platforms that are most popular with undergraduates.

The study included 143 undergraduates at the University of Pennsylvania who each completed a survey to determine their baseline mood and well-being at the start of the study. They also all supplied a week’s worth of data from their smartphones to demonstrate their current social media habits.

Hunt’s team randomly assigned each participant into one of two groups. They instructed the undergraduates in the first group to continue using social media as usual and asked those in the second group to limit their use of Facebook, Snapchat, and Instagram to just 10 minutes a day for each platform. 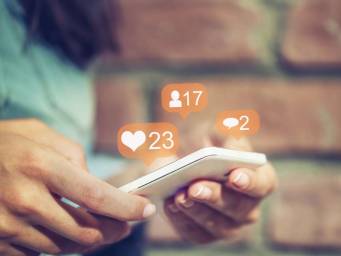 Over 3 weeks, the participants made their smartphone data available to the researchers and completed surveys that examined a range of factors, including the participants’ anxiety, depression, loneliness, and fear of missing out.

The results showed that the group who reduced their social media use experienced significant decreases in depression and loneliness. These effects were “particularly pronounced for folks who were more depressed when they came into the study.”

Should you quit social media?

Based on these findings, Hunt offers some advice for social media users who may be worried about the effect that these platforms could have on their well-being:

“When you’re not busy getting sucked into clickbait social media, you’re actually spending more time on things that are more likely to make you feel better about your life. In general, I would say, put your phone down and be with the people in your life.”

“It is a little ironic that reducing your use of social media actually makes you feel less lonely,” she says. “[…] When you look at other people’s lives, particularly on Instagram, it’s easy to conclude that everyone else’s life is cooler or better than yours.”

However, although Hunt believes that there is a strong case for limiting screen time on these apps, she emphasizes that her team’s study does not conclude that young people should give up social media entirely.

In February of this year, Jeffrey Hall, an associate professor of communication studies at the University of Kansas in Lawrence, claimed that two of his studies had debunked the “social displacement” theory that the more time people spend on social media, the less likely they are to devote time to socializing with people in “the real world.”

“I’m trying to push back on the popular conception of how this works,” Medical News Today quoted Hall as saying. “That’s not to say overuse of social media is good, but it’s not bad in the way people think it is.”