A new article published at “The Sun” a famous daily English newspaper described how human will look like in the year 3000 according to opinions of Human Anatomy experts , according to the photo they drew I wish this will not happen but i will let you read their prediction.

“EVOLUTION has changed our bodies and faces over thousands of years — and it’s still happening.
Here’s how leading anatomical experts predict our descendants will differ physically from us in 1,000 years from now.

– We’ll be TALLER at 6-7ft because of improved nutrition and medical science. Osteopath Garry Trainer, from north London, says: “The average American is about one inch taller than in 1960.”

– Our INTESTINES will get shorter so we don’t absorb as much fat and sugar — a natural way of avoiding obesity, says dentist Dr Philip Stemmer.

– If male fertility declines further, there will be SMALLER TESTICLES (tough luck, chaps).

– Our most used extremities will change dramatically.

ARMS AND FINGERS get longer to reduce the need to reach too far and nerve endings in hands and fingers will increase because of the greater use of devices such as iPhones that need complex eye-hand coordination.

– We’ll have SMALLER BRAINS, maybe because so much memorising and thinking is done by our computers. “Science fiction images show humans of the future with huge brains but big brains are not necessarily the best,” says Chris Stringer, from the Natural History Museum.

– There will be LARGE EYES to compensate for smaller mouths. Cary Cooper, of Lancaster University, explains: “Communication will rely on facial expressions and eye movements.”

– Dentist Dr Stemmer also thinks there could be FEWER TEETH as softer food needs less chewing and biting. He says: “We could even get our nutrition from liquids or pills in the future, which could mean less teeth and receded jaws.”

– Expect people to have QUADRUPLE CHINS. “Our bodies were designed for eating less and using more energy than a modern lifestyle requires,” says Rajiv Grover, a consultant plastic surgeon.
We can expect other dramatic changes too.

– Everyone will have the same shape of NOSE because climate is having less influence on broad or narrow hooters thanks to air conditioning and central heating.

– Central heating and warm clothing means we’ll be LESS HAIRY but there’ll be more WRINKLES as a result of peering at our electronic devices.

We could end up with saggy turkey necks too because extra sun will cause loose skin and baggy eyelids.
And there will be darker skin as people move around the planet and races mix.” 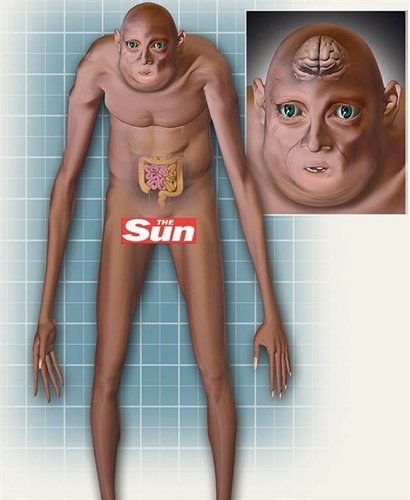