Video: How Mosquitoes Use Six Needles to Suck Our Blood And Transfer Viruses Or Parasites

Seen up close, the anatomy of a mosquito bite is terrifying. One of the most dangerous animal in the world uses six needle-like mouthparts to saw into our skin, tap a blood vessel and sometimes leave a dangerous parting gift.Scientists have discovered that the mosquito’s mouth, called a proboscis isn’t just one tiny spear. It’s a sophisticated system of thin needles, each of which pierces the skin, finds blood vessels and makes it easy for mosquitoes to suck blood out of them.

Male mosquitoes don’t bite us, but when a female mosquito pierces the skin, a flexible lip-like sheath called the labium scrolls up and stays outside as she pushes in six needle-like parts that scientists refer to as stylets. Two of these needles, called maxillae, have tiny teeth. The mosquito uses them to saw through the skin. They’re so sharp you can barely feel the mosquito biting you.

“They’re like drill bits” said University of California, Davis, biochemist Walter Leal. Another set of needles, the mandibles, hold tissues apart while the mosquito works. Then the sharp-tipped labrum needle probes under the skin, piercing a vessel and sucking blood from it.

The sixth needle – called the hypopharynx – drools saliva into us, and delivers chemicals that keep our blood flowing. Mosquito saliva also makes our blood vessels dilate, blocks our immune response and lubricates the proboscis. It causes us to develop itchy welts, and serves as a conduit for dangerous viruses and parasites. 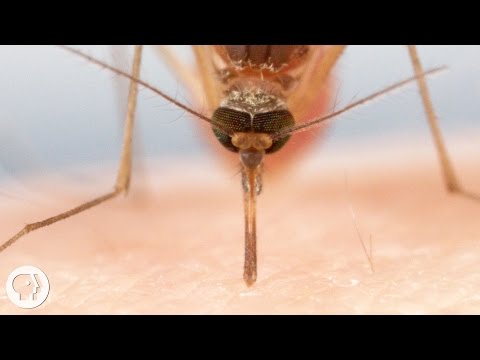