What can you eat on an anti-inflammatory diet?

What can you eat on an anti-inflammatory diet?

An anti-inflammatory diet involves eating healthful foods that help reduce inflammation in the body. Doctors have identified that some foods and seasonings can reduce the number of inflammatory compounds in the body. Examples include cocoa, the capsaicin in chili peppers, and foods containing vitamin D.

Making small but meaningful changes to the diet may reduce the inflammation that rheumatoid arthritis (RA) causes, while also boosting energy and making it easier to achieve and maintain a healthy weight.

In this article, we look at several anti-inflammatory recipes for different times of the day. Many of the recipes and suggested meals below are also suitable for vegetarians and vegans.

toast-with-apple-and-nut-butter.jpg1100x734
Whole-wheat toast with nut butter and apple is a healthful anti-inflammatory breakfast.

To feel satiated on an anti-inflammatory diet, people may wish to start the day with a protein-rich breakfast. Examples include:

A warm cup of green tea is an excellent choice for an anti-inflammatory breakfast drink.

Incorporating fruit into the diet at breakfast, during the day as a snack, or as an after-dinner dessert can help fight inflammation. People should aim to eat 1.5 to 2 cups of fruit with each meal.

Examples of fruits to include are:

Seasonal fruits can also be beneficial. Mango and pomegranate are two excellent options when they are available.

Oatmeal is a fiber-rich food that is easy for people to include in an RA diet. Where possible, it is best to choose slow-cooked oats over instant ones as they tend to be lower in sugar. Adding the berries in the list above can boost the nutritional content of the oatmeal and enhance the flavor.

For lunch, people should look to include whole grains, vegetables, fruits, and lean proteins. Below are some examples of anti-inflammatory lunch options.

Fresh, green salads are a great anti-inflammatory option for lunch. Start with a base of spinach, kale, or both and then add fruits, such as tomatoes, oranges, and thinly sliced apples.

According to a 2017 review, these fruits could help reduce the expression of some inflammatory compounds.

Soups are an excellent way to add vegetables and protein-rich foods to the diet. Examples of soup options to try include:

Most of these soups contain ingredients that people can also use in breakfast and dinner meals.

lentils-and-tofu-are-lean-sources-of-protein.jpg1100x734
Lentils and tofu are lean sources of protein.

As a general rule, anti-inflammatory recipes for dinner should include a lean protein, which is a protein that is also low in fat. Examples include:

An anti-inflammatory diet allows the addition of a little extra-virgin olive oil and seasonings to taste, which can help enhance the flavor.

Extra-virgin olive oil is less processed and refined than most olive oil options. As a result, it may be more nutrient-dense.

Some seasonings, such as ginger and turmeric, include compounds that may have inflammation-fighting properties.

Beans are a source of fiber that can boost the overall nutrient levels of a person with RA. They also contain the vitamins iron, magnesium, potassium, and zinc.

The Arthritis Foundation recommend eating at least 1 cup of beans twice a week. Examples include:

A bean medley can make an excellent, protein-packed side dish or main meal.

Another dinner option for an anti-inflammatory diet is to create a delicious stir-fry. This can include a variety of proteins and vegetables in addition to rice or noodles.

One anti-inflammatory food that people should include in a stir-fry is onions. Onions contain plenty of antioxidants that can help fight inflammation. They also blend well with other stir-fry vegetables, such as sugar snap peas, carrots, peppers, and green beans.

Red wine contains a compound called resveratrol, which has some anti-inflammatory properties.

However, alcohol can interact negatively with some RA medications, such as methotrexate. Therefore, people taking medication for RA should always talk to a doctor before including red wine in their diet.

Eating snacks is a great way to stay full throughout the day and avoid the temptation of high-sugar and high-salt foods. These types of food may increase inflammation in the body.

A simple anti-inflammatory snack is a mix of seeds and nuts, which could include:

Another tasty snack or dessert option is a few squares of high-cocoa chocolate, which has a cocoa percentage of 70 or more. Cocoa is high in flavanols, which are compounds that can have anti-inflammatory effects in the diet.

If a person with RA is trying to lose weight, an anti-inflammatory diet is usually a great place to start.

Eating a diet rich in fruits, vegetables, whole grains, and lean proteins is often sufficient to lose weight while still taking in enough calories each day.

According to the Arthritis Foundation, around two-thirds of a person’s diet should come from whole grains, fruits, and vegetables. The remaining one-third should comprise low-fat dairy and lean protein sources.

Some of the foods that research has shown to relieve inflammation include cold-water fish that contain omega-3 fatty acids. Examples of these fish include: 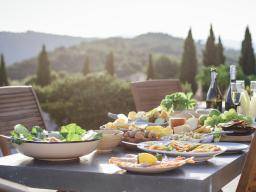 Just as some foods appear to fight inflammation, others may increase it.

Fried foods can increase the number of compounds called advanced glycation end products (AGEs) in a person’s blood. The levels of AGEs tend to be high in people with inflammation, so it is likely that they play a role in its development.

Excess omega-6 fatty acids may also cause inflammation if a person does not have enough anti-inflammatory omega-3 fatty acids in their diet to balance them out.

Sources of omega-6 fatty acids include some cooking oils, such as corn, sunflower, safflower, and soybean oils.

People with RA may benefit from following an anti-inflammatory diet. Many recipes are available for each type of meal to help people follow this diet.

Anti-inflammatory diets are often healthful diets that promote healthy digestion and are usually free from harmful sources of fats, such as trans fatty acids. Instead, these diets contain healthful fat sources, such as fish and olive oil.

A person should always consult a doctor before starting a new diet or trying a supplement for the first time. These dietary changes can sometimes lead to negative interactions with medications or have an adverse effect on overall health.

For more tasty recipe ideas, the Arthritis Foundation and other organizations provide collections of recipes that are full of anti-inflammatory foods.